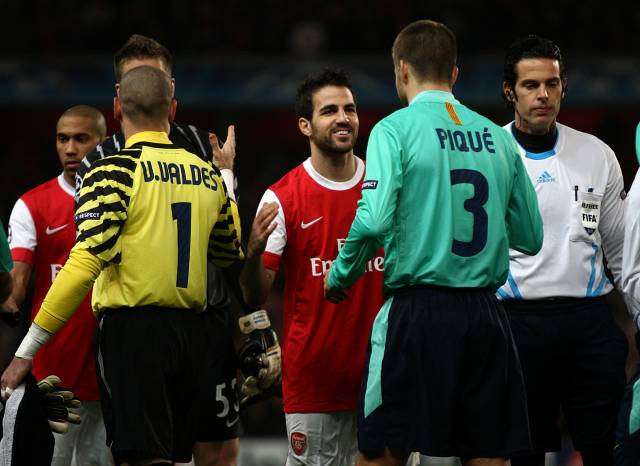 Of course, it’s only ‘half-time’. Yes, Arsenal have still got to face Barcelona on their own patch and, by jove, they’ll only be taking a precarious one-goal advantage to the Camp Nou in a fortnight’s time, but until then Cesc Fabregas and his minions can revel to their heart’s content in having beaten the ‘best side in football’s history’ at their own soddin’ game…well, sort of anyway.

Said Fabregas after the game:

“They don’t lose many games. They are the best side in football’s history in my opinion. This is 180 minutes. It’s a nice victory. It will give confidence to the team but that’s all.”

“The difference between this year and last? First of all we don’t have five or six injured players. Second, we are all one year older. We are mature enough to play big games.

“We showed it here but if we don’t show it (in the second leg), it counts for nothing.”

After a fairly tentative opening period, Arse fell behind to a David Villa goal of almost ‘surgical’ quality before rousing themselves to clinch the tie late in the second-half, thanks to an almost impossibly acute Robin van Persie finish (the first thing of any note he’d done all evening) and a plummy 83rd-minute cameo from Andrey Arshavin, who finished off a sweeping counter-attack with aplomb when the smart Rubles seemed to be on the wayward Russian careening the ball into the hospitality tier.

Great game, enthralling throughout and dripping with positives from an Arsenal perspective (i.e. Koscielny was up to task, Wilshere outshone Xavi in the middle, the fight-back only began once the great Nicklas Bendtner entered the fray, Barca looked absolutely cream-crackered in the second-half, err…they won).