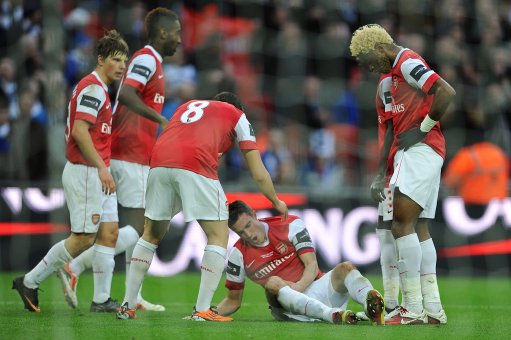 Breaking news (by way of the BBC) that Arsenal will have to travel to the Camp Nou for their Champions League second leg with Barcelona next Tuesday without injured duo Robin van Persie and Theo Walcott.

Interim captain Van Persie limped out of the Carling Cup final on Sunday after wrenching his knee in the act of scoring Arsenal’s equaliser, while Walcott has been laid out since spraining his ankle against Stoke the Wednesday previous.

After the tabloids spent this morning speculating, the BBC’s Sport team are now reporting that both players will be unavailable for the Barca clash.

However, the Beeb are also carrying quotes from Arsene Wenger, in which the Gunners’ manager appears relatively positive that skipper Cesc Fabregas will have shaken off his hamstring twinge in time to square-off against his boyhood club.

“Cesc is looking possible. He is making quick and good progress. It is possible.”