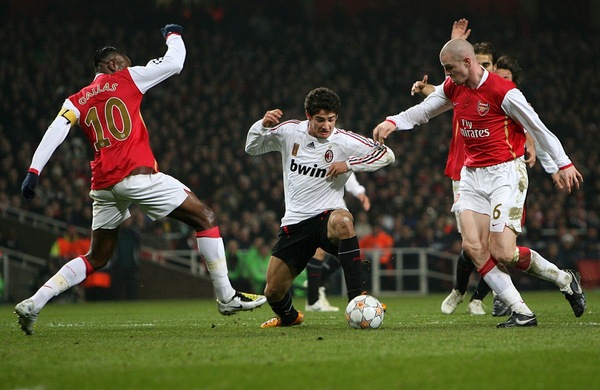 Arsenal’s central defenders, at time of writing:
William Gallas
Philippe Senderos
Mikael Silvestre
Thomas Vermaelen
Johan Djourou
The Kolo TourÃ©-shaped hole is large, but despite the Ivorian’s undoubted class, he never played particularly well alongside Billy Gallas; the two didn’t get along off the pitch and that showed on it. Because when you talk about central defenders, it’s important to talk about partnerships, not individuals. Rio Ferdinand and Nemanja Vidic are fine players in their own right, but together they’re even better. By contrast, the Gallas/TourÃ© axis was less than the sum of its parts.
So while many Gooners would have rather ditched Gallas and kept TourÃ©, the fact is Gallas now has the chance to form a solid defensive relationship with a new partner.
Gallas/Vermaelen would seem to be the most obvious partnership, but that’s a lot to ask of the Belgian in his first season. And of course there’s the possibility that Arsene Wenger will bring in a new central defender before the new season begins. Brede Hangeland maybe?
In Wenger’s shoes, who would you play at the heart of a new-look Arsenal defence?
I would have to go with Gallas/Vermaelen, hoping that the former Ajax player hits the ground running.