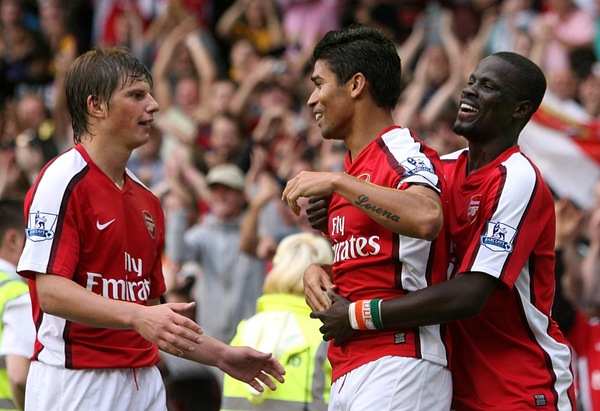 After just one fantastic performance, Arsenal are now The Form Team in the Universe. Which means they’ll pass Celtic – an average team at best – off the park in tonight’s Champions League playoff at Parkhead, right?
If only football was that simple. Parkhead on a European night is a fearsome prospect, especially when an English club heads north of the border.
There’s no doubt that Arsenal are the better team than Celtic, and Wenger’s squad couldn’t be more confident right now, but tonight’s match will be close. Scottish football’s reputation is in the gutter (which, coincidentally is where you’ll find many Scotsmen who venture south of the border) and tonight’s game, the first competitive match between these two teams (hard to believe, I know), represents a great chance for the Hoops to restore some pride.

So this won’t be another six-goal football lesson by Arsenal. Celtic will scrap and hustle and do everything they can to stay in the tie. A score draw then? I call 1-1.
What’s your prediction? Vote below: