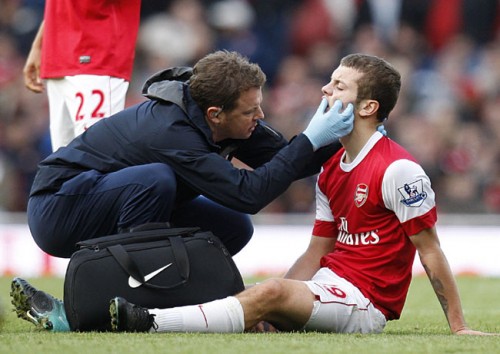 According to The Mirror, Jack Wilshere may not kick a ball in anger for Arsenal until December. The young England schemer has yet to play a competitive game for the Gunners this season after injuring himself in pre-season and is currently forced to wear a surgical boot.

Admittedly, the report is full of “ifs” and “buts”, however, the fact that the midfielder has missed a number of vital games for Arsenal this season already once again calls into question the medical staff at the north London club.  The ongoing injury curse was central to that 8-2 mauling at Old Trafford when Arsene Wenger’s side had to do battle without the likes of Thomas Vermaelen, Kieran Gibbs, Bacary Sagna and Wilshere, not to mention a trio of suspended players.

Maybe club physio Colin Lewin is the footballing equivalent of Dr. Harold Shipman, secretly and methodically injuring the Arsenal playing staff for some kind of sick pleasure. Keep an eye on him, Arsene.

Post Script: The news is true! The young whippersnapper himself has Tweeted: “I can confirm I will be out for around 2-3 months! I am working hard in the gym to stay fit and I am gutted but I will be back stronger!”