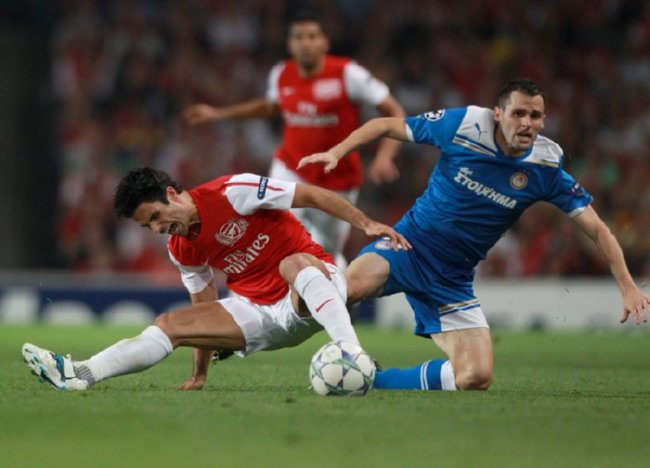 An early first-half double from Alex Oxlade-Chamberlain and fellow summer-signing Andre Santos was enough to earn Arsenal a win over Olympiakos at the Emirates last night and subsequently pick up the first victory of their Group F campaign.

Oxlade-Chamberlian opened the scoring in the 8th-minute, playing a slick one-two off a defender’s knees before cutting a low shot back across goal through his marker’s legs and into the far corner –  thus becoming the youngest ever English Champions League goalscorer in the process.

Left-back Andre Santos then doubled the lead 12 minutes later, cutting in from the touchline after seeing his cross cut out and burying a low shot inside Franco Costanzo’s near post from a narrow-ish angle.

David Fuster pulled one back for the Greek side on 27 minutes, heading home after arriving unmarked in the area to meet Ariel Ibagaza’s floated cross and Vassilis Torossidis later rattled the bar with a venomous, curling effort – but Arsenal managed to hold out for more than an hour to eventually snare themselves the three points.