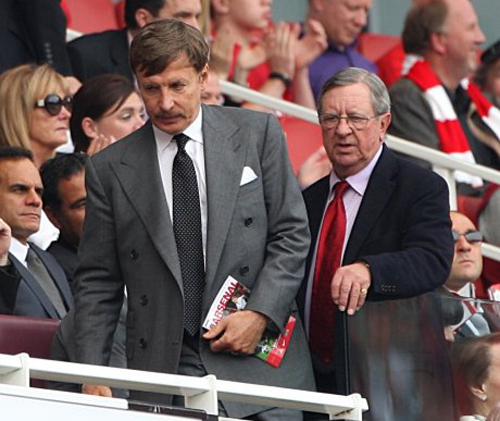 Silent Stan Kroenke finally spoke to Arsenal’s shareholders at the club’s annual AGM in London today. The US billionaire said: “(Arsenal) has tremendous management at the top, a wonderful manager on the pitch who makes great decisions in regard to personnel, and a tremendous following with the supporters. With all those things in place, it was an easy decision for us to get more involved.”

“We are glad to be here, are happy with the direction of the club and are here for the long term – we love London, ” he continued. ” You had better get used to seeing us, because we will be around.” Presumably “we” means both him and his hair.

Old-school Chairman Peter Hill-Wood did little to bridge the growing gap between the old Etonian and Arsenal’s fanbase, contriving to give away as little information as possible in his answers.

However, Arsene Wenger called for the Gunners’ supporters to keep the faith.

“I can see a lot of fear and discontent among you – and I can understand that because we live in a world where we fight with people who have extremely high resources, ” he said. “We can compete by trying to be intelligent and to be united, because football is very difficult to be consistent and we have been more consistent than anybody in the world in the last 15 years.”

“To stay at the top, top level we have to stay united, ” he continued. “That does not mean not I am not to be criticised, or the board – we accept that, but we have to show to the outside we are united. If you are not, then you have no chance.”

Some positive news not discussed at the AGM was that in-form striker Robin van Persie has opened talks with the club over a new contract.