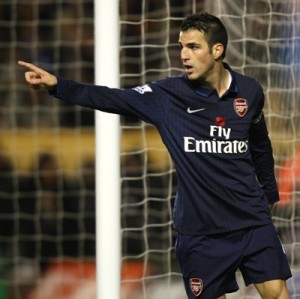 Another good day to have Cesc Fabregas and Robin van Persie in your fantasy team (and on current form, why wouldn’t you?). Wolves are a mediocre side at best, but a 4-1 win at Molineux is not to be sniffed at. The hosts were a little unlucky with the opening two goals – although no one would begrudge Eduardo a little good fortune – but Arsenal were blatantly the better team.

Anyone who doubts the title credentials of Wenger’s men should reconsider – these Gunners CAN win the league this season, although only if Fabregas and RvP stay fit for at least 80% of the campaign. I’d still have them as third favourites, behind Chelsea and Man Utd, but not by much. The bookies [Paddy Power in this case] see it the same way:

Liverpool out to 20/1 already! If they beat Birmingham today, and Rafa does some good business in January (David Villa?), that might turn into a half-decent each-way bet. Okay, a tad optimistic.

Anyway, I digress. Photo gallery of the game at Molineux below: