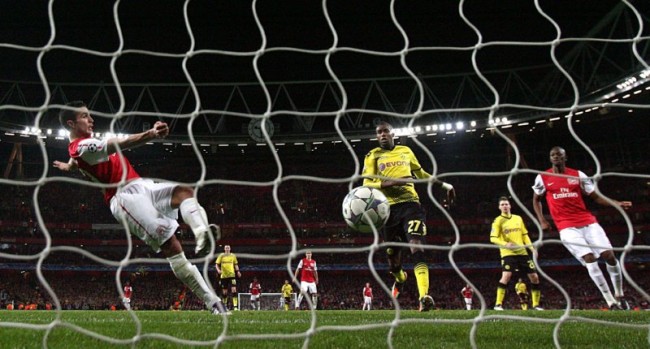 Apparently Robin van Persie suffered a back injury after last night’s 2-1 win over Borussia Dortmund at the Emirates. You can fill in the ‘carrying the team’ punchlines yourselves.

The Dutchman scored both Arsenal’s goals (Shinji Kagawa netting Dortmund’s consolation), taking his tally for the season to 16 and his tally for the calendar year up to 33 in 30 games. It’s getting a bit silly and, if all goes to plan, we’re going to have a little more on Van the Man’s incredible scoring feats later today, so we’ll leave it for now.

Arsenal are home and hosed as far as the knockout stages are concerned, reaching the second round for the 12th season on the trot. Congrats where congrats are due.

As for Dortmund, I was mightily disappointed. The two games against Arsenal have been the only chance I’ve had to cast my beady peepers over the supposed new beaus of European football (Goetze in particular) and, save for a few nice touches hither and thither, they’ve been slightly lightweight on both occasions. Granted, it’s two, isolated, difficult games we’re talking about here, but they haven’t really done their burgeoning reputation justice and dat make Hulk sad.