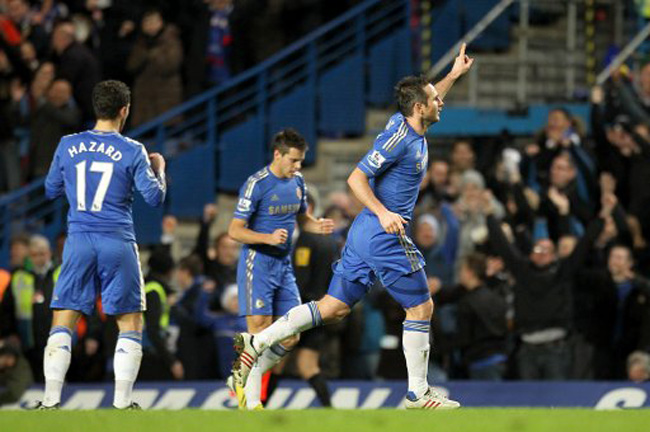 Bloody hell! I wonder how many of those ‘Rafa Out’ banners are, as we speak, quietly being folded up and put away in homes around west London this evening, or indeed, simply being chucked in the bin?

In Sunday’s second Premier League game of the day, the Blues simply demolished an Aston Villa side who had come to Stamford Bridge on the back of a fine 3-1 victory at Anfield last week.

Fernando Torres, continuing his resurgence under Rafa Benitez headed home superbly after just three minutes before David Luiz fired home a superb free-kick and then Branislav Ivanovic made it 3-0 by half-time.

The Villans were shell-shocked at this stage, and the Blues added five more goals in the second-half, courtesy of Frank Lampard (on his 500th Premier League start), a brace from sub Ramires, a penalty from another sub Oscar and a goal from Eden Hazard. Oh, and youngster Lucas Piazon even missed another spot-kick.

Winning 8-0 in the end, Blues became the first-ever side in the Premier League with seven different scorers in a single game.

It’s difficult to know what to take from a freakish game like this, but it’s probably fair to say that Paul Lambert’s youthful Villa squad a decent amount of strengthening in January if they are to steer clear of  a relegation battle. As for Rafa’s Blues – with Luiz looking like a world-class midfielder and a whole plethora of creative talent on show, they may still give the Manchester clubs a run for their money in the title race.