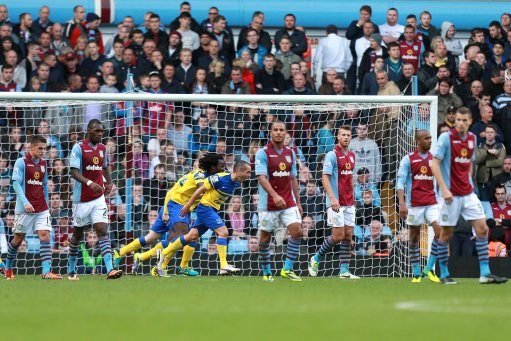 Romelu Lukaku and Leon Osman were the goal-heroes for Everton on Saturday, with the pair firing their side to a hard-fought 2-0 win at Villa Park.

Billed, rather naffly, as the ‘Battle of the Belgians’, it was Christian Benteke who had the best chance to open the scoring for the Villans, only to see his early spot-kick saved superbly by Tim Howard. Indeed, Benteke had a number of chances to score but failed to find a way past Howard.

However, ultimately Villa’s lack of a cutting edge would cost them dear when first Lukaku, on 68 minutes, and then Osman 13 minutes later, secured a victory for Roberto Martinez and co. which keeps the Toffees four points off the top. Paul Lambert’s Villa, on the other hand, find themselves n 13th, two points off the relegation zone.