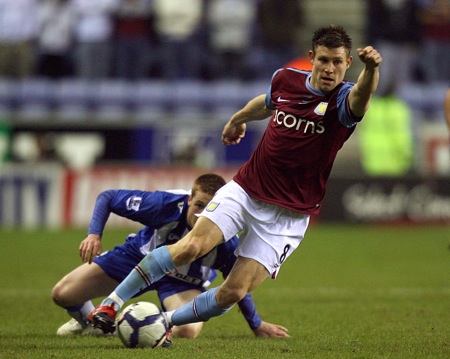 Another terrific display by James Milner capped a fine away win for Villa, who are not yet out of the running for fourth. Milner scored the winner and generally showed what a fine player he’s become this season – compared with recent lifeless turns by Frank Lampard and Steven Gerrard, Milner is certainly playing well enough to earn a World Cup starting role on merit. But where to play Milner – through the middle or out wide?

The latter, probably. Milner has done very well in the middle of late, and his all-action performance at the DW Stadium won effusive praise from Martin O’Neill:

“It was an extraordinary performance by a really good player,” Villa’s gaffer said. “Since he has stepped into central midfield his game his improved tenfold and he continues to go from strength to strength.

“When you play wide you depend on other people giving you the ball to get into the game but when you have got that determination and energy, you might as well use it in the centre of the field.”

Hear hear. But is Capello ready to risk such a relatively inexperienced midfielder at the heart of England’s team in South Africa? I doubt it, but I hope Milner gets the chance to state his case for a central berth in one of England’s next friendlies.

As for Wigan, they are flirting worryingly with the drop zone. I think they’ll be okay, but they desperately need three points in their next game. Happily, it’s at home to Brian Laws’ Burnley, so three points it is.

The best photos from the DW: