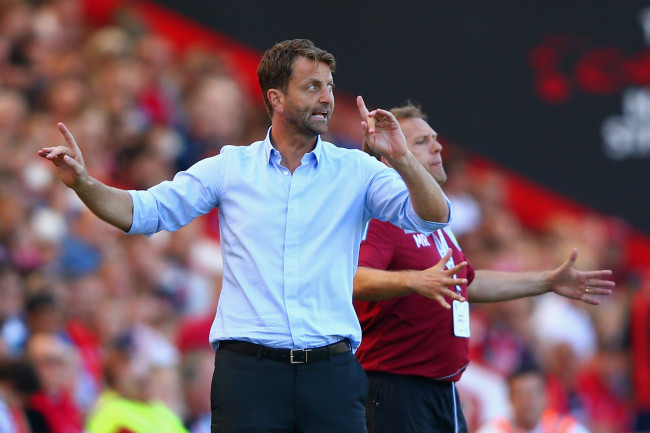 Aston Villa manager Tim Sherwood has been talking of a “new era” at the club. He’s typically bullish about the Premier League season ahead.

It’s good that the club have backed me. Change is what was needed. We’ve sold a lot of players, so we needed to replenish. And we brought in a lot of money, so the owner has not put that back into his pocket, he’s invested into the squad, which we’re all very excited about.

Some of these foreign boys we’ve gone for are better than the English ones, they’ve played a lot more games at a very young age.

You look at the English boys, they’ve played five games and they cost the same amount as a guy who has played 200 games in Ligue 1. It doesn’t add up.

Too many of our home-grown young players believe they have arrived before their journey has even begun. How many stay after training to improve? How many young players can only kick with one foot? How many reach a standard of such excellence that practice produces? Not that many because they don’t have to.

But they are rewarded as if they are the complete package. It’s like Roger Federer being unable to hit a backhand — ridiculous.

Not Another Season Of Flirting With Relegation

I know it’s going to be difficult, and we have to realise that. We lost two very influential proven Premier League footballers [Christian Benteke and Fabian Delph].

But it’s up to me to make sure that the ones we bring in to the club gel as quickly as possible. If we can consolidate this season, we’re only going to improve in the seasons ahead because it’s such a young group.

We lost 47% of our goals last season with one player [Benteke]. So we need to start finding goals from other positions and winning games. The signings are only going to be any good if you start winning.