Daniel Sturridge found the back of the net for the first time since March, as Liverpool won a cracking clash with Aston Villa at Anfield. 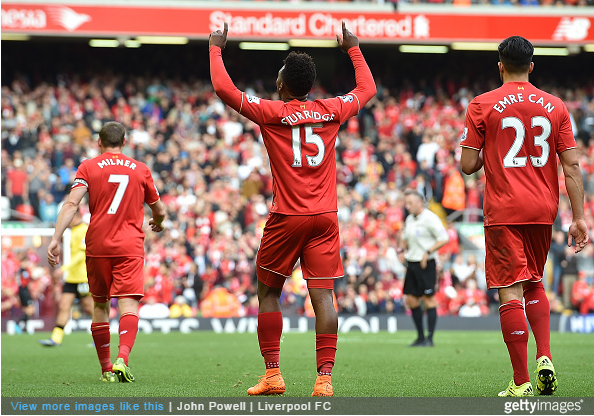 With only just 66 seconds of the game gone, summer-signing James Milner netted his first goal for the Reds with a fine strike from outside the box.

Liverpool were the better side throughout the first-half, with Aston Villa rarely venturing forward.

After the break, the second goal came for the Reds, with Sturridge volleying home superbly after a clever pass from Milner.

However, soon after, the Villans got themselves back into the game after poor defending from the Reds, with Rudy Gestede scrambling home to make it 2-1 to Liverpool.

Only 70 seconds after Gestedes’s effort, the hosts regained their two-goal advantage, with Sturridge netting after a classy one-two with Philippe Coutinho.

Again, Villa responded, with Gestede powering home a magnificent header to set up a tense finale.

However, in the end the Merseysiders saw the game out to earn a precious three points and take at least some of the pressure off manager Brendan Rodgers. Liverpool move up to seventh in the table while Tim Sherwood and his charges stay in the bottom three.