Chelsea got back to winning-ways on Saturday courtesy of a deserved, if still not totally convincing, 2-0 win at home to Aston Villa. 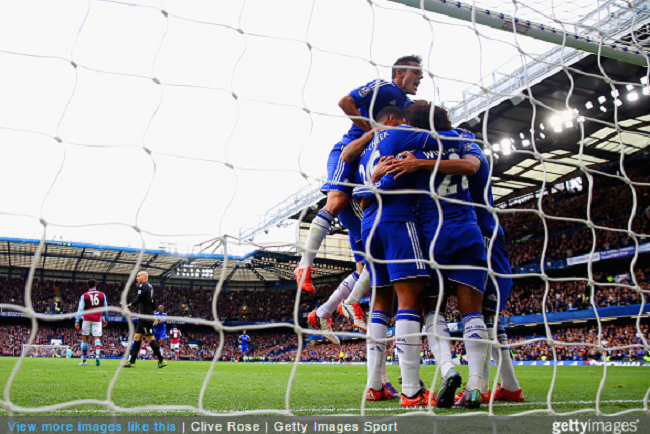 Jose Mourinho started with Baba Rahmann on the left of the back four, with Cesar Azpilicueta taking over the right-back berth from Branislav Ivanovic while Ruben Loftus-Cheek started in place of Nemanja Matic.

Tim Sherwood’s Villans were poor from the start, creating little and prone to giving the ball away far too easily.

However, it took the Blues until the 34th minute to open the scoring, with Diego Costa tapping in after Brad Guzan and Joleon Lescott conspired to give Willian the ball.

Youngster Jack Grealish was the visitors’ best player in the first period but overall Villa rarely threatened the Blues’ goal.

At the break, Jose Mourinho hauled off Loftus-Cheek, replacing the young midfielder with Matic.

The second goal came on 54 minutes and once again Villa were their own worst enemies, with Alan Hutton deflecting in a Costa shot.

Rudy Gestede did his best to trouble John Terry and Kurt Zouma at the heart of the Chelsea defence, but overall the Villans were, as has often been the case this season, sub-par.

The much-needed win sees the champions move up to 11th, 10 points behind leaders Manchester City. As for Aston Villa, they remain in the bottom three with the pressure surely mounting on Sherwood.