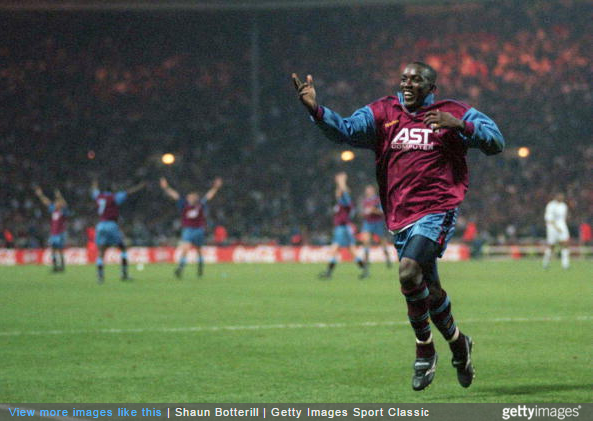 With Tim Sherwood shown the door following yesterday’s lapse 2-1 defeat against Swansea, the Aston Villa manager’s gig is once again up for grabs.

Several names have already been mentioned in passing, with ex-Lyon coach Remi Garde currently favourite to land the job ahead of the likes of David Moyes, Brendan Rodgers and Nigel Pearson.

However, perhaps a little optimistically, Dwight Yorke has also thrown his hat into the managerial morass – claiming that, while being completely inexperienced, he possesses the natural affinity with Villa fans to pull the listing West Midlands club out of the hole.

People are going to say I’m crazy for putting my name in the hat, but I’ve been involved in football for a very long time and, having played for Aston Villa for ten years, I’ve looked at the club and seen the direction they’re heading in – it’s a dire situation.

Yes, Tim was sacked yesterday and that’s very sad, but it’s a situation that’s been ongoing for around five years now.

You look at the way Villa have spent their time in the Premier League, avoiding relegation just by the skin of their teeth. They’re bottom of the league now and it’s a very worrying time for the club.

You look at their squad and think they should be doing much better than they did under Tim, but the most worrying thing is that their main rivals in the table, the likes of Leicester, West Brom and Stoke, they all have better squads and for me that is absolutely crazy!

Aston Villa are supposed to be the biggest club in the Midlands, but they’re nowhere near. They think they are a big club but the reality is that Villa, certainly in the last five or six years, have been deteriorating rapidly and that’s why they’re at the bottom of the table.

The former Villa striker also addressed his lack of credentials, countering by claiming that his sheer gusto will be more than enough to pull him through:

People will say I don’t have any experience, but we’ve seen people with experience go in there and struggle to do a job.

It’s whether the owners are prepared to give an aspiring young manager an opportunity.

You look at the managers available now, it’s a merry-go-round.

In the 30 years I’ve been involved in football it’s been the same people getting job after job, so why are young managers doing all their coaching badges but not getting that opportunity?

There are young people ready to break into management and I don’t see any reason why I shouldn’t put my name in the hat.

Villa need something to really spark them up right now. I spent ten years there, I had a fantastic relationship with the fans there and I just feel when I look around at the managers up for grabs at the moment that they need something a bit more exciting to come in and really lift the place.”

Something tells us that Villa are extremely thankful for Yorke’s interest in their post, but are committed to pursuing other candidates at the moment.