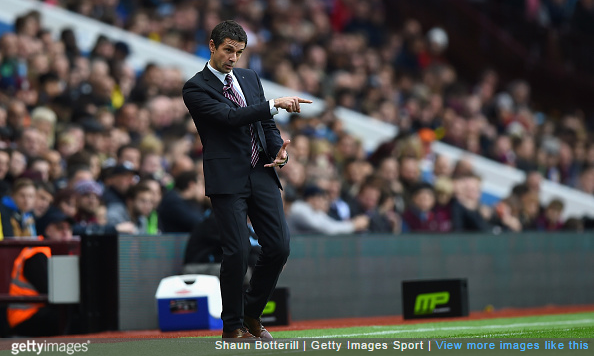 The new boss left Joleon Lescott and Jack Grealish on the bench, as he rejigged the Villa side.

Unsurprisingly, the visitors started strongly, with Yaya Touré pulling the strings in midfield. The Ivorian started the move which eventually saw Aleksandar Kolarov’s shot saved onto the post by Brad Guzan.

On 24 minutes, City were dealt a blow with Wilfried Bony forced off due to injury. Jesus Navas came on for the striker, with Kevin De Bruyne moving into a central attacking berth.

Just before the break, Raheem Sterling embarrassed himself with a dive of Ashley Young proportions after brushing past Ciaran Clark. However, the England man dodged a booking.

In the second-half, Manuel Pellegrini’s side continued to dominate with Kolarov again testing a shaky Guzan with a free-kick. However, soon after the American was the hero for the Villans, with Sterling’s point-blank range header stopped by the ‘keeper (via his shaven bonce).

The onslaught continued, with De Bruyne this time fluffing his lines when he really should’ve scored.

Ex-Villan Fabian Delph came on for Touré on 78 minutes, to a suitably hostile reception.

A mini-palavar then ensued when Joe Hart struggled to control a very strong throw-in from Villa sub Gestede, who was giving the ball back to City after a foul.

At the death, Fernando saw his header thump the Villa crossbar before Delph’s effort went wide.

However, Garde would ultimately lead his new side to precious point after a well-organised and disciplined defensive display. As for City, they go a point clear of Arsenal and Leicester at the top of the table, at least temporarily.