Remi Garde came to Aston Villa four months ago, hoping to steer the struggling giants away from the relegation zone. However, instead the former Lyon manager oversaw a disastrous period, with the club winning just two of their 20 league games. Now, on the back of the Championship-bound Villans losing six in a row, Garde’s inevitable departure has finally come to be.

The 49-year-old Garde replaced Tim Sherwood in the Villa Park hot-seat in a three-year deal back in November, but it was apparent from early on, that the change wasn’t having the desired effect. A catastrophic transfer window which saw the Villans buy no-one infuriated Garde who knew that major investment was needed in his mediocre squad.

Losing against Swansea 1-0 in his last game in charge, Garde saw his side go 12 points from safety and destined for the drop. On Tuesday evening, the club released the following statement… 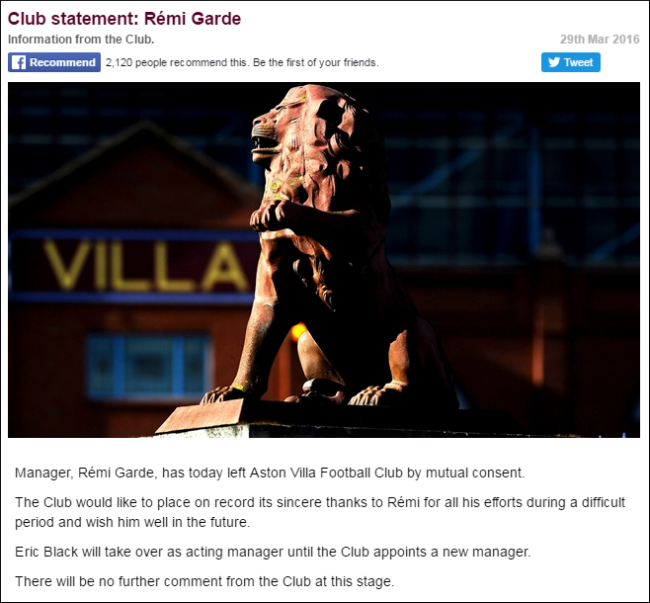 To be fair to former Arsenal star Garde, he arrived at a club in disarray, with owner Randy Lerner’s mismanagement of the once great club at the root of all their current problems.

While Garde is rumoured to be wanted by his former club Lyon, Lerner and co. now face the prospect of live in the second-tier of English football, with the American billionaire eager to sell after a disappointing decade at Villa Park.