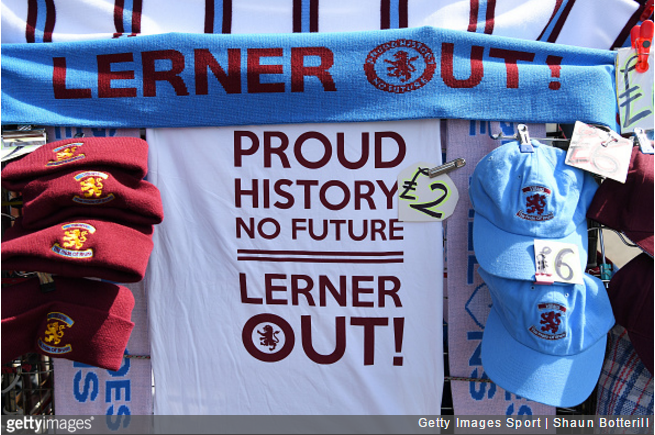 Aston Villa’s much-loved owner Randy Lerner has issued a statement to the fans today in which he takes full responsibility for the club being relegated from the Premier League in such dismal fashion.

A nagging sense of inevitability set in against Leicester City despite the late lead we enjoyed. Can’t say why although I doubt I’m alone…

How many seasons after all can one hold on and hope to slide through? That is not Aston Villa. That kind of desperate existence is totally unacceptable, unbearable and totally incompatible with Villa’s glorious past.

That is not what, or why, I looked to get involved back then and it is why I’ve looked for some time to make a change. I can say certainly in good faith that I have tried to sell since my May 2014 announcement and put our beloved club in better suited hands – but that hasn’t happened.

I write to Villa supporters to make clear that this relegation lies at my feet and no one else’s. And because I believe in Aston Villa and know it will come back stronger and more able, with love and care for the community it serves, with the edge and attitude it must have to represent our history and tradition.

Memories of Acorns on the shirt, and Ashley Young scoring a late winner against Everton still romantically nourish me. I know Villa will return better, stronger.

I will continue to try to put the club into worthy hands as I have, and also do my best to position Villa for the quickest possible return to its rightful place among England’s elite.

If you’re being “romantically nourish” by memories of Ashley Young then something, somewhere is fundamentally wrong.