Today, 27th February 2019, marks the 20-year anniversary of the last time a Premier League club started a match with 11 English players on the pitch.

Well, it’s actually 13 years since Middlesbrough did likewise against Fulham in May 2006, but James Morrison (born and raised in England) then went onto to represent Scotland at international level, so Boro’s line-up has been struck from the official record books. 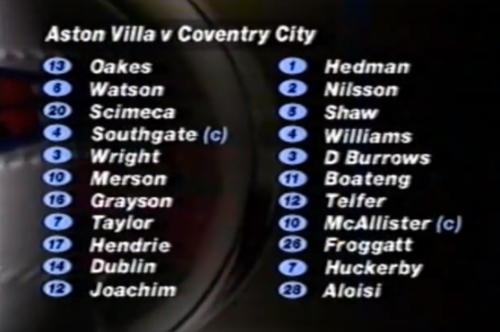 Image: Match of the Day/BBC Sport

*Sigh* Them were the days.

‘Twas Dublin who scored Villa’s goal from the penalty spot, while John Aloisi and the usually goal-shy George Boateng both scored a brace apiece for the Sky Blues.

As it happens, Villa wouldn’t have to wait too long to wreak cruel revenge two years later when a 3-2 win at Villa Park in May 2001 brought Coventry’s 34-year stay in the top flight to an end.

Coventry actually went 2-0 up too, rendering the precise manner of their terminal capitulation all the more embarrassing.