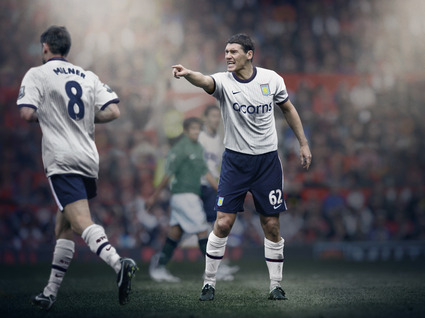 Barry will never wear Villa’s lovely new away kit in anger
Man City don’t do long, drawn-out transfer sagas. Leave that to Real Madrid et al. Their move to sign Gareth Barry was ruthlessly and swiftly executed. Few people saw it coming, and I guess there are more than a few irate Villa fans wondering how the hell they lost their captain so easily. Barry has even written a letter of apology to Villa fans, which will be published in today’s Birmingham Mail. An online excerpt of the letter reads as follows: “I have honestly been very undecided what to do, the manager and the whole club have bent over backwards to try and persuade me to stay and made me a fantastic offer, which I am extremely grateful for.”

Damage limitation, then. And even the sight of Randy Lerner bending over backwards wasn’t enough to persaude him to stay in the Midlands. But Barry’s claim last year that he wanted to leave Villa in search of the Holy Grail of Champions League football has been revealed as something of a joke. City won’t be in Europe next season, Villa will. So much for ambition. No, this must be about the cash and not much else, apart from a fresh challenge -Â and to be fair to Barry, he has given Villa more than a decade of good service.
Some sources estimate Barry will be on double the wages Villa paid him, so around Â£100,000 a week. That’s a hell of a lot of money for a player who is not a Premier League A-lister.
So Villa get Â£12m and a captain-shaped hole in their already thin squad. Again, so much for ambition – we’ll now see how good a gaffer Martin O’Neill really is, by who he brings in to replace Barry.
For their part, City get an England international who can play on the left and potentially form a more than useful central-midfield partnership with the blossoming Stephen Ireland.
Who do you think got the best end of this deal?