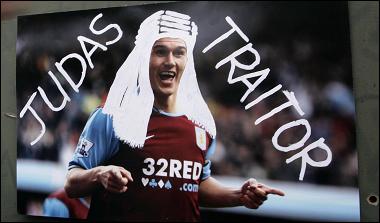 A witty Villa fan’s attempt to deface a poster of the club’s ex-skipper. Fail
And so Gareth Barry joins the sorry ranks of British football traitors, along with all the other Judas Iscariots who had the nerve to leave one football club to join a different football club. And he only gave them 11 years of honest graft -Â what a money-grabbing weasel.
Honestly, to brand Barry a traitor and Judas is absurd and laughable. He’s been a terrific servant to Villa, a fact I’m sure the majority of the club’s fans recognise. Anyone who boos him, for example when he comes to Villa Park next season wearing a Man City away shirt, is officially an idiot.