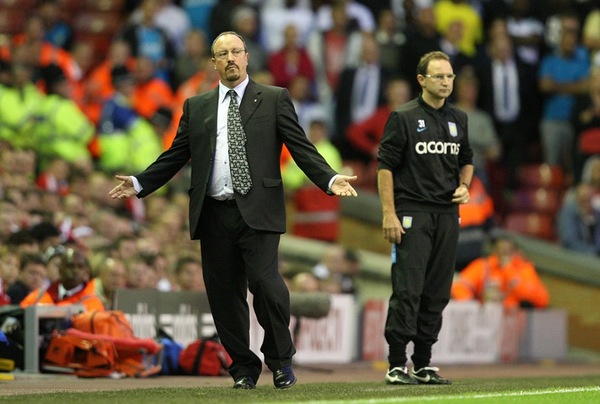 Firstly, congrats to Villa, who not only needed this win but deserved it – although it should be said that Liverpool had their chances. First victory at Anfield in eight years. Have to say I didn’t see it coming.

A special mention goes to Liverpool old boy Brad Friedel, who was immense. All in all, it was a classic counter-attacking away win. Highlights below:

Secondly, I don’t think Liverpool are out of the title race, as some are inevitably suggesting. I don’t think they’ll win the league this season either (their best chance under Rafa came last season but they came up short), but then I said that before the first game. However, Rafa’s team can still compete for the title. Why? Because this title race is wide open.

With sides like Man City and Tottenham looking stronger than at any time since the Prem began (Liverpool won’t be the only big four team to lose at White Hart Lane this season), and honest sides like Burnley and Wolves scrapping for their lives, I think this will be the most competitive Prem campaign ever. As such, the big four will all drop points, and sometimes when you least expect it.

The title will be won with far fewer points than Man Yoo managed in 08/09, and so the fact that Liverpool have already lost as many games in 09/10 as they did in the whole of last season is not such a damning stat as it might be. And don’t forget that last season Man Utd managed just four points from their first three games.

Liverpool should be concerned though. The fact is, they don’t look anything like as settled as they did in 08/09. Fernando Torres looks distracted and frustrated, Steven Gerrard is not up to speed, Xabi Alonso is gone and sorely missed, Lucas is not so bad – that own goal won’t help his standing among Kopites – but he’s not yet good enough either, Rafa is moaning… at least Glen Johnson looks good.

Overall, the signs are ominous, but as I said before, to write anyone off after three games is ridiculous. Wait until Chelsea and Arsenal lose their first games, then we’ll talk again.