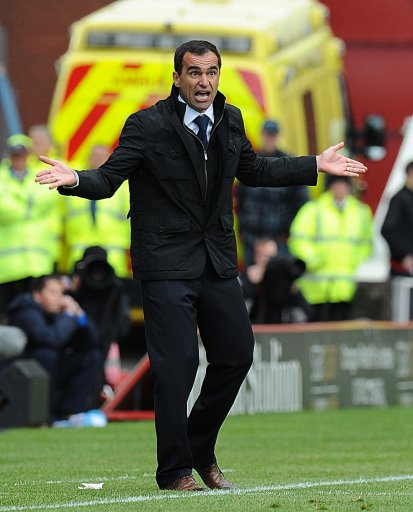 First we all thought Mark Hughes was a shoe-in, then came the swiftly kiboshed whispers that Carlo Ancelotti was favourite for the job, then Schteve McClaren was ruled in and swiftly ruled out again quicker than you can say ‘Croatia on a wet Wednesday’ (apparently he was told by Villa execs that he would be ‘wasting his time’ by attending an interview – harsh), then rumours began spreading that Rafa Benitez was all but set to step in – but you can forget all that baloney, for it now looks like the man Aston Villa want to replace Gerard Houllier is none other than Wigan manager Roberto Martinez.

“Aston Villa have acted above board and in a totally professional manner. They wrote to me asking for permission to speak to Roberto. He was on holiday at the time and I granted Villa permission.

“He arrived back yesterday and I presume he has spoken to Villa. I have made it clear to him I will be extending his contract.

“I have never let him down on anything and he has never let me down. I know I can never say never in football, but I would be very surprised if he is Aston Villa’s new manager.”

Villa struggling to stave off relegation all next season, beating Manchester United one week then getting soundly thrashed 7-1 in each of their next four games, lather, rinse, repeat – all while playing football ‘the way it’s supposed to be played’? I can see it now.

All kidding aside, Martinez is a sought-after, talented young manager with an proven eye for a cheapo bargain in the transfer market – though I’d seriously question whether he has the managerial presence to successfully persuade Villa’s seemingly outbound stars (Young, Downing, etc) to commit to the cause.