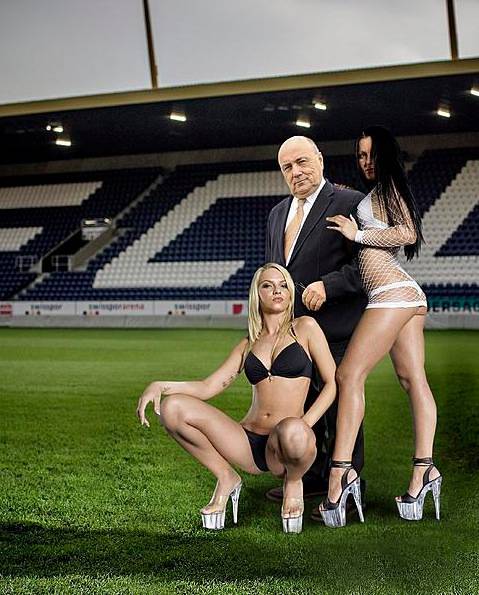 The 68-year-old owner of Swiss club FC Luzern, Bernard Alpstaeg, has come up with an ingenious ploy to pull the crowds in at the Swissporarena: hire “sexy dancers” to perform before each and every home game.

Brilliant! How could it possibly fail? Who cares if it alienates vast swathes of your supporters!? Wooo!!! Boobies!!!

Alpstaeg has apparently already cherry-picked the precise girls he wants to perform and has submitted his proposal to the Swiss Football League authorities in the hope that he’ll get their clearance to begin slutting up his pre-match amble.

“It is going well. Alex Frei and Vladimir Kinder (Luzern’s director of sport and head coach respectively) do a super job. We have a great team. FCL inspires. FCL is sexy again! But we can be even more attractive!

“I want a show before kick-off. Preferably scantily-clad, sexy dancers to entertain fans before the game. The stadium would be full, guaranteed!”

Sadly for Bernard Stringfellow, it’s looking likely that his sexy plans will be kiboshed as current Swiss Football League rules state that only players, club coaching staff and TV crews are allowed onto the pitches for the hour before kick-off, as chairman Edmond Isoz explained to Blick:

“Because we carry every game live on TV, we must adhere to a strict timetable. The countdown begins an hour before the game

“Accordingly, there is no time and no space for these shows”.

Well, it was nice while it lasted.