This banner was unfurled during Newell’s Old Boys’ game against Godoy Cruz on Sunday intimating that, after just three days on this planet, Lionel Messi’s newborn sprog Thiago has already been registered as a member of the clubs’ supporters group, thus becoming member/socio no. 2881152… 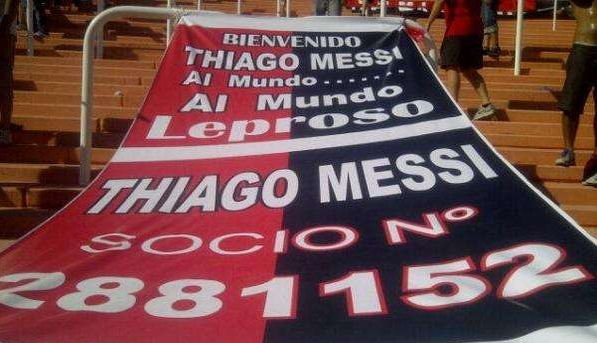 Messi Snr took his first footballing steps with Newell’s back in 1995 before buggering off to Barcelona five years later at the age of 13, therefore the fans retain a special place in their collective heart for their prodigal son and, it would seem, their prodigal son’s prodigal son.

For those wondering what ‘leproso’ is all about, Newell’s Old Boys’ delightful nickname is ‘The Lepers’ because – and we have Wiki to thank for this – they once played in a charity match to raise funds for a leprosy clinic back in the 1920s and the name stuck.