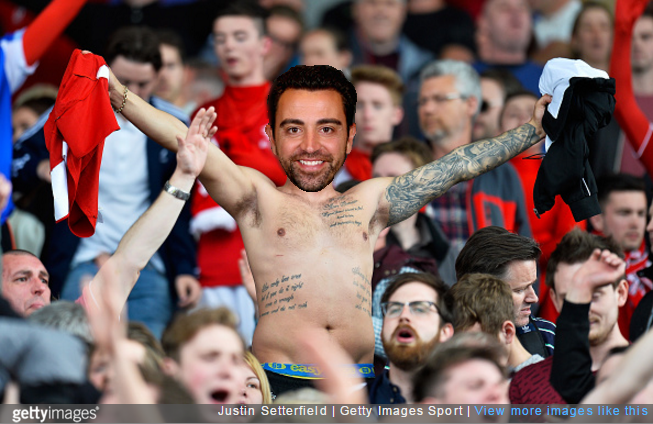 Barcelona legend and metronomic midfield passing deity Xavi Hernandez has revealed, rather unexpectedly, that he is a closet Middlesbrough fan.

While discussing the nature of English football fan culture, Xavi let slip that he’s been eagerly following Boro’s fortunes since his old Real Madrid adversary Aitor Karanka took over as manager in 2013.

Rather surprisingly, the Yorkshire Post are also reporting that Xavi threw Sheffield United’s name into the mix as well:

I met a boy the other day. English. He was wearing a Barca shirt but I asked him who he supported.

He said: ‘Sheffield United’. I know them, they have 20,000 fans in the third division. That’s incredible. You get that in England.

I watched some of a game with Charlton the other day. There was football on television, yet the stadium was packed with supporters. Incredible.

If that was in Catalonia, Olot vs. Reus, then there were would be a few people there and the families of the players.

Xavi the Boro fan. Who’d have thunk it? He must see a lot of himself in Grant Leadbitter.