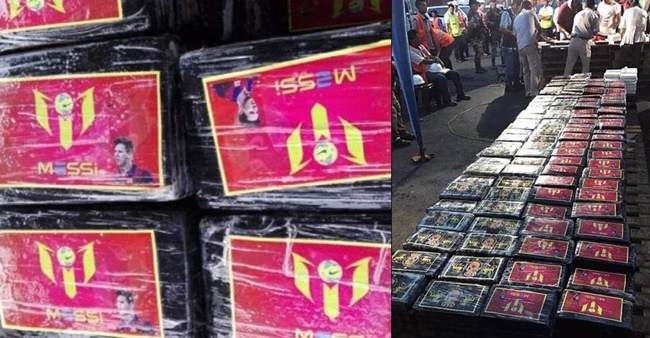 Drug police in Peru have seized a enormous shipment of cocaine bearing the image of Lionel Messi and worth an estimated $85million (approx. £68million).

A massive 1,417 kilos of the drug were intercepted by the Peruvian National Police’s Anti-drugs Office (Dirandro) in Lima on Wednesday after it was discovered wrapped in containers of squid fillets bound for Belgium.

According to ESPN, Messi’s image and brand logo were stamped all over most of the bricks, while the remainder featuring the word “King” and a likeness of the King of Spain.

The shipment was found over the weekend after arriving in Lima over land and headed west with a final destination as the port of Callao.

Apparently the logos and sealed packages are used by traffickers to denote the purity of the drugs as well as guaranteeing that the contents haven’t been tampered with in transit.

With investigations ongoing, Dirandro have confirmed that nobody has been arrested or detained yet.