With football’s increasingly grotesque finances being thrust to the forefront recently, fans of spiralling excess will be no doubt enthused to learn that Barcelona have become the first sport team in the history of humankind to breach the £10million average wage mark.

The Global Sports Salary Survey, conducted by Sporting Intelligence, found that the average salary Barca pay their 23-man first team squad (before bonuses) is close to £10.5million – the average weekly wage being a shade over £200,000… 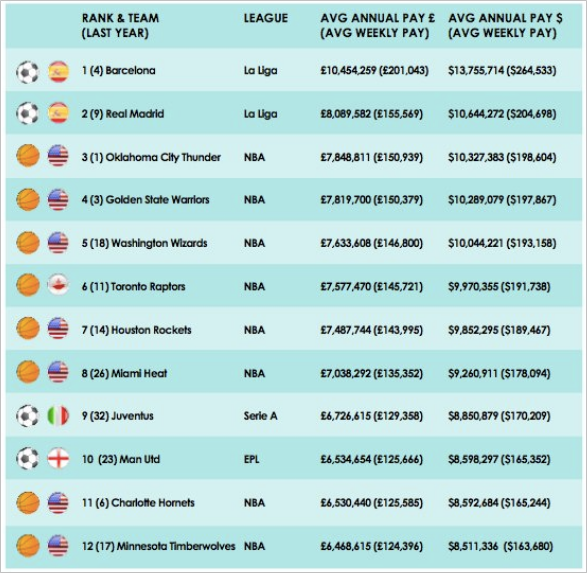 Up one third from the previous season, the Catalan club’s figures are spiked by, among other things, Lionel Messi signing a new contract worth in excess of £50million a year as well as the likes of Gerard Pique, Sergio Busquets and Samuel Umtiti all agreeing lucrative extensions of their own.

Real Madrid are the next football team on the list with their first-team squad pocketing an average of £8.1million a year.

The NBA then muscle in on the next six spots (Pies had honestly never heard of Oklahoma City Thunder until today) before Juventus and Manchester United arrive to fill out the rest of the Top 10.

Interestingly, Juve have leapt up from 32nd place on last year’s list almost entirely due to the arrival of one Cristiano Ronaldo.

For the record, Man City are down in 20th place, while Chelsea, Arsenal and Liverpool are all also nestled inside the Top 40.

Indeed, the Premier League as a whole is still the ‘richest’ league in world football, with players earning an average yearly wage of £2.99million – that’s some 36% more than in La Liga (£2.2million) in second.