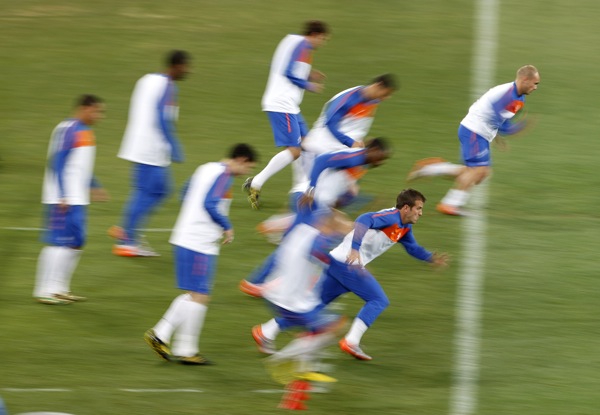 After 63 matches and God knows how many blown vuvuzelas and ballooned set pieces, the 2010 World Cup is down to its end game: the Netherlands v Spain, an all-European final in Africa.

There will be a new World Cup champion and most people, including the bookies, are firmly in the Spanish corner. European champions Spain, so similar to the all-conquering Barcelona, have not dazzled in this tournament, and after a shock defeat to the Swiss, it looked like they might not even get out of their group.

But thanks mostly to David Villa, they did scramble to the knockout stages (they did have the advantage of a very weak group), and it’s there that they blossomed, with lynchpins Xavi and Andres Iniesta at last finding their feet, thereby lightening the load on new Barcelona team-mate Villa.

Their effective performance against the dangerous Germans was a lesson in the importance of possession. When Spain take the lead, they take the ball and refuse to give it back. 1-0 thrashings are forged in this way.

However, if my head says Spain, my heart beats for the Netherlands. Even though they are a team of unlovable, egotistical players – Van Bommel, Robben, Van Persie – there is something mystical and appealing about the orange shirt.

After two hurtful final defeats, in 1974 (with Cruyff) and 1978 (without Cruyff), they are owed some luck. In this tournament already, they have had plenty, with opponents self-destructing at opportune moments, but I have a gut feeling that there is one more slice to be served: Wesley Sneijder looks like a man so blessed right now that he could score with his arse, and with Arjen Robben operating as a lone, loose cannon, and Robin van Persie appearing to be match-fit at last, I feel Spain’s back four will be properly tested; the Dutch defence, not as bad as some people thought, will receive serious protection from Van Bommel and De Jong. Dirk Kuyt will use every last ounce of his energy to keep one side of the pitch locked down.

Overall, I feel this is a good match-up for the Netherlands, just as Germany were opponents readymade for Spain.

Anyway, it should be a fascinating match, long on quality if nowhere near as open as Saturday’s third-place playoff.

My prediction: Netherlands 2-1 Spain (after extra time) – with goals by Van Persie (2) and Iniesta.