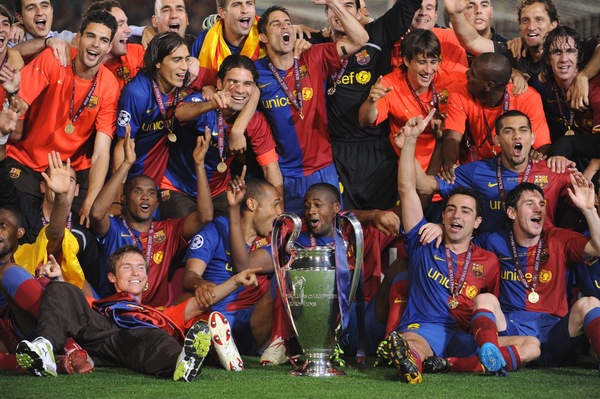 This is where you get to pick Barca’s best starting line-up for this season. First up, I’ll reveal my selection (based on Barcelona’s squad at time of writing). No doubt Pep Guardiola will use several different formations this season but this is the default starting team I would go with:
My XI (in a 4-1-2-3 formation):
Victor Valdes
Dani Alves, Carles Puyol, Gerard PiquÃ©, Eric Abidal
Yaya TourÃ©
Xavi Hernandez, AndrÃ©s Iniesta
Lionel Messi, Zlatan Ibrahimovic, Thierry Henry
Compared with picking Arsenal’s best XI, this seemed fairly straightforward. Barcelona haven’t made many changes to their brilliant, Champions League-winning squad this summer, and why would they?
At the back, there is a reassuringly settled look. There is no threat to Victor Valdes or Dani Alves, for example. At left-back though, I thought about picking new signing Maxwell ahead of Abidal, but decided to go with the more defensive player; Maxwell will get his chance but the Frenchman deserves to keep his place. In the middle, Carles Puyol gets the nod ahead of Rafa Marquez, and starts alongside the imperious Gerard PiquÃ©, who is now firmly established – in my mind, at least – as the club’s first-choice centre-back.
In midfield, again there can be little dispute about the first choices. Some of you may prefer Sergi Busquets to Yaya TourÃ©, and while both are fine defensive midfielders, TourÃ© has the edge. Those little Spanish geniuses, Xavi and Iniesta, must start.
Up front, same story: Zlatan is a direct replacement for Samuel Eto’o, with Lionel Messi and Thierry Henry as the wingmen. Formidable x3.
So that’s how I see it. (I’m right, of course.)
Let’s hear your XIs…

MORE
What is Tottenham’s best starting XI for the 09/10 season?