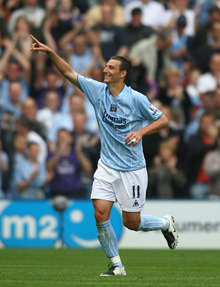 With Chelsea struggling to keep their stars happy while they (supposedly) attempt to change their style of play with an unproven manager, thereâ€™s a chance that another club could make it into the Big Four this season.
Before a ball was kicked it was supposed to be Arsenal that were there for the taking, prompting their North London rivals to spend big in search of a Champions League spot â€“ although things havenâ€™t quite worked out for Mr. Jolâ€™s Spurs.
While clubs at the bottom of the table are all struggling for points, there are a few teams in the so-called second tier of the Premier League who are close enough to threaten the big boys â€“ can any of them do it?
Click through to vote for the club most likely to crash the Champions League party

Sven has silenced his critics so far at Manchester City with a brand of exciting football that we didnâ€™t always see while he was England manager. Itâ€™s even more impressive considering the team was assembled with no time to spare and the club still lacks a main striker â€“ the test will come during winter when most of his new stars would normally be expecting a break.
Harry Redknapp might tell you that getting the 40 points to escape relegation is his main priority but with the way Pompey are playing, Europe is a real possibility. Benjani heads the scoring charts and they donâ€™t lose many at Fratton Park so all they may need to do is improve their away form.
Blackburn deserve praise for hardly spending a penny last summer, while the Â£3.5m they did spend on Roque Santa Cruz could be one of the bargains of the season. They are a hard working team that doesnâ€™t concede too many and have more flair than Arsene Wenger would have you believe.
Big Sam has given Newcastle their best start since the halcyon days of the Kevin Keagan era. The football may not be as pretty as in the past but Allardyce likes to play â€˜winning footballâ€™, which should be enough to charm the Toon Army even if most of his new recruits have been defenders.
Then again, Chelsea still have the players to mount a challenge if they can just sort out the behind the scenes in-fighting and remind Roman that they donâ€™t give out trophies just for playing attractive football.