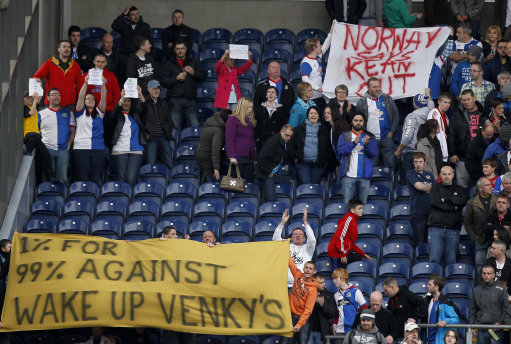 Anti-Steve Kean protests have almost become part of the Premier League experience at Ewood Park this season. With the club currently struggling in 18th place in the table, and having won just six league games out of 31 under Kean’s stewardship, Rovers’ fans are desperate for a change.

However, ahead of Saturday’s fourth successive fans’ protest, the club have decided to ban people from unfurling banners calling for Kean’s dismissal either before or during Blackburn’s game with Chelsea.

Apparently the club is concerned that the protest may provoke a counter-demonstration which could lead to trouble.

Glen Mullen, one of the organisers of the protests, seem rather accepting of the ruling: “Not being able to have banners is a blow but we take health and safety very seriously, ” he said. “The protest group’s conduct has been exemplary throughout the last couple of months and we wish all our demonstrations to be peaceful with clear messages.”

“Although disappointed, we respect the club’s decision to impose a banner ban in the interest of public safety.”

To their credit, Blackburn will allow the protest to take place once the game itself is over (and most of the TV cameras are gone, presumably?).