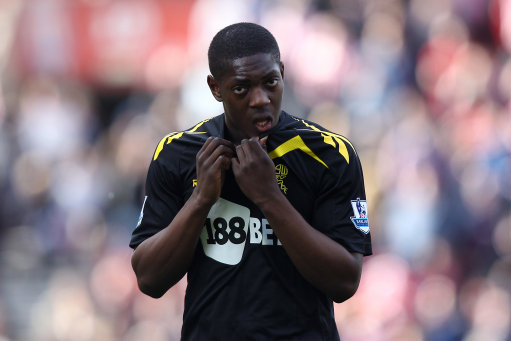 The Metropolitan Police arrested six Millwall fans during yesterday’s Championship match with Derby County at the New Den after an obscene banner was unfurled in the stands proclaiming Bolton striker Marvin Sordell to be a ‘c**t’ for reporting the racial abuse he suffered when the two sides met at the ground back in October.

A 13-year-old boy was banned from the New Den ‘for the foreseeable future’ by Millwall after admitting he verbally abused Sordell (who also claimed on Twitter that teammates Darren Pratley, Benik Afobe and Lee Chung-Yong were also racially abused by fans) during the Bolton game – though, of course, it’s Sordell who’s the c**t in all of this.

This was obviously seen as ‘grassing on a kid’ by the dumbarse Millwall fans in question, who quickly got to work – daubing their masterpiece with their washable felt-tip pens.

A spokesman for the Met Police said: “Six males were arrested (over alleged public order offences) during the game at Millwall in relation to a banner being unfurled at the game. They remain in custody at this time.”

The banner was quickly confiscated by stewards during the game, but thankfully not before the police got a good look at it.