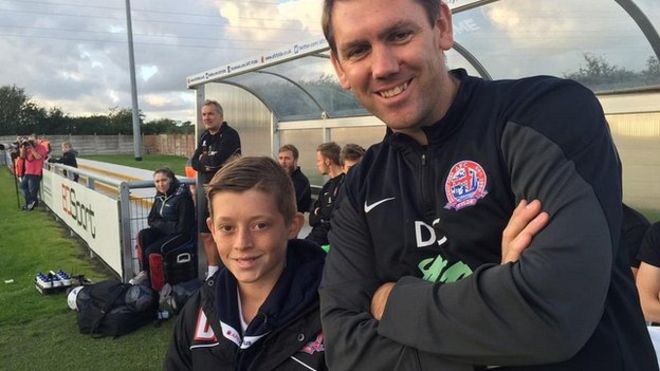 Fresh-faced Daniel Fryer took charge of Fylde for the very first time against Bolton and didn’t look out of place in the dugout despite the fact that he had no managerial experience whatsoever up until a few hours before kick-off.

In fact, his previous footballing experience had mainly come in a ballboy capacity, what with being an 11-year-old lad and all.

Daniel was allowed to step up into the manager’s role after a fellow Fylde supporter (who had won the one-off opportunity as a prize during the club’s end of season awards ceremony) found that he would be unable to attend the Bolton friendly.

As such, the youngster was allowed to give the team talk, chair a post-match press conference and even make substitutions during the game while working alongside Fylde’s usual manager, ex-Tranmere long-throw-in supremo Dave Challinor.

Speaking before kick-off, young Daniel confirmed that he had his gameplan sussed.

“I will make sure to keep them high in confidence before the game,” he said.

“If they are not doing well at half-time then I will get in to them.”

Challinor added: “Dan’s a massive help to the club on matchdays anyway, but he’s obviously been given a bit of a promotion.

“It’s a great insight for him into what goes on in the dressing room and on the bench.”