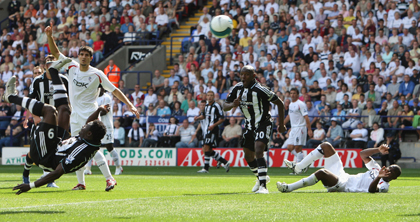 The Premier League is only a week young, but we’ve already seen some cracking goals being scored. A couple that caught the eye were debutant Oliver Kapo’s Exocet missile against Chelsea and Andy Todd’s nostalgic diving header, which sealed a late equaliser against Portsmouth.
But, the pick of the bunch so far has to be Obafemi Martin’s overhead kick for Newcastle against Bolton last Saturday. The Nigerian pocket rocket chested up a James Milner cross before unleashing a spectacular bicycle kick from close range â€“ and judging from Geremi’s open mouthed expression in this picture, even his team mates couldn’t believe it.
“Jeepaz Creepaz,” as the Geordies might say.