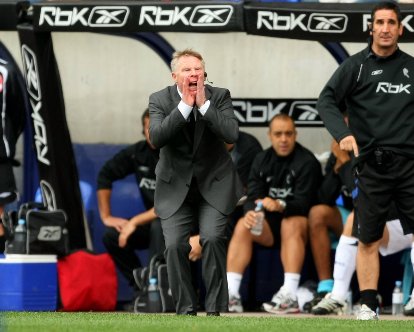 As a Bolton fan, my worst fears about Sammy Lee are coming true. Pre-season saw me, as usual, worried about relegation (mixed with wild optimism). It would seem that I’m not alone in my pain as Bolton Wanderers languish at the foot of the Premier League without a decent performance to their name.
Read over for the thoughts of the fans.

Over at The Wanderer, they opine “In the world of the warrior, seppuku was a deed of bravery that was admirable in a samurai who knew he was defeated, disgraced, or mortally wounded. It meant that he could end his days with his transgressions wiped away and with his reputation not merely intact but actually enhanced. If Sammy Lee were Japanese, and at the moment thatâ€™s the best place for him, then he might be considering seppuku and falling on his metaphorical ceremonial sword.”
At Wanderers Ways, a chap called Casino notes “Lee has failed to turn around the slide that began under fatman. Fatty couldn’t turn it around and he is a top manager. We have big problems [but ]i don’t think sacking lee will solve em. Now is not the time to panic”
At Bolton Banter, in an open letter to Sammy Lee, they are keeping the faith in the manager with the only criticism going toward Lee’s inability to get the players in shape. “I expect you to be strong, and stronger than your predecessor [in the removal of lazy and overweight players from our team. When Campo a couple of seasons ago was overweight, the team was quick to sort him out and put him on a â€œdietâ€ and bench to get himself better and back. Now the same has to be done to Mr Nolan. Now I never was and never will be a big fan of Nolan, but on form he can be useful, scores a few goals and manages to motivate some of his colleagues, but now, besides him being overweight he comes out as lazy.”