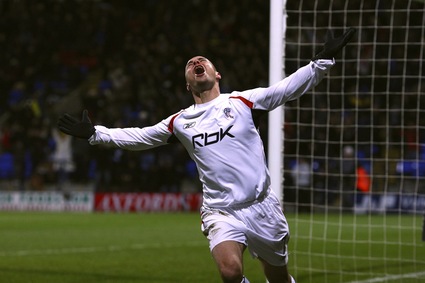 Stelios of Bolton Wanderers celebrates scoring the winning goal in the 90th minute of last night’s Premier League match between Bolton and Derby County at the Reebok Stadium.
Derby battled gamely and probably deserved a point from the game, but their fate is sealed, barring the most miraculous escape in Premier League history. They may go on to accrue the lowest points total in the league’s history, and I think there’s a strong argument to say that they are the weakest side ever to grace the Prem. I predicted at the start of the season that Derby would struggle to get more than 15 points, and I’ve seen nothing that will make me change my mind â€“ unless they sign three or four excellent players in the Jan transfer window.
Photo Michael Steele/Getty Images