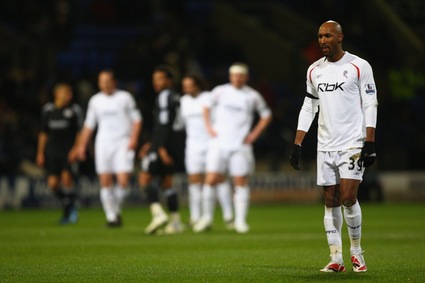 Anelka is the main man at Bolton, the star attraction, their best player. Bolton are ‘Nicolas Anelka’s Bolton’, just as Arsenal were ‘Thierry Henry’s Arsenal’ not so long ago. He is happy at the Reebok, but he should be â€“ it’s the sort of club that fits neatly with his selfish, ‘big fish in a small pond’ attitude.
In my opinion, Anelka would rather stay at a small club where he can be the hero, than fight for recognition at a star-studded club like Real Madrid. He’s never been much of a team player and I don’t think this particular leopard has changed his spots.
Would Anelka fit in at Chelsea, a likely destination for him in the Jan. transfer window (Anelka has said this week he’d like a move to Stamford Bridge)? I doubt it. I can’t see him being too keen to play alongside either Didier Drogba or Andriy Shevchenko.
If I was Avram Grant, I’d look elsewhere for a solution to my problems up front. I actually think someone like Jermain Defoe or Darren Bent would do quite well in a blue shirt. Chelsea don’t need any more egos.
Do you agree? Vote after the jumpâ€¦