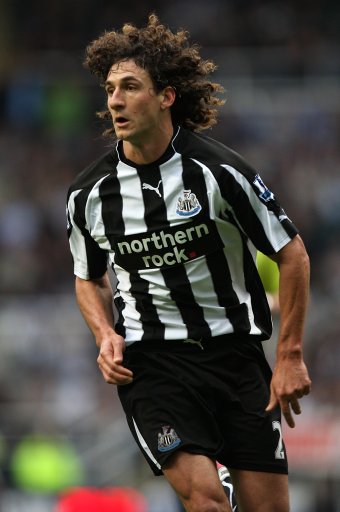 Newcastle centre-back Fabricio Coloccini has admitted that he fully deserved to be red-carded for smacking Bolton’s John Elmander across the chops during his side’s 5-1 Barclays Premier League defeat at the Reebok Stadium on Saturday, but the perma-permed defender insists that he did not intentionally try to elbow the Swedish striker.

The Argentinian told the Evening Chronicle:

“I apologised to my team-mates – that is normal. I am sorry for everybody, but now we have to move on. It was a red card. It wasn’t with my elbow, but it was the same because it was my arm.

“It was a red card. It’s disappointing, although I can’t do anything about it now. The next time, I know I can’t do it.”

Coloccini has received a fast-track three-match ban from the FA for his dismissal and, as a result, will now miss Sunday’s home game with table-toppers Chelsea, along with his side’s upcoming fixtures with West Brom and Liverpool.

Meanwhile, fellow Newcastle centre-back Mike Williamson may also be facing a retrospective ban as the FA are currently reviewing video footage of an off-the-ball clash, again with the rejuvenated Elmander, in which the defender appeared to poleaxe the Bolton striker with his shoulder.