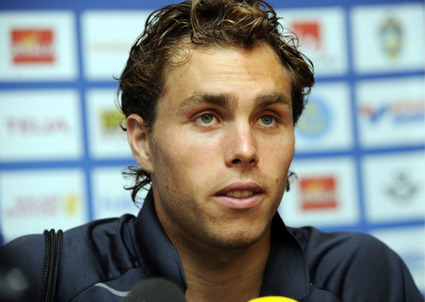 Name Johan Elmander
Age 27
Nationality Swedish
Club history Holmalunds, Orgryte, Feyenoord, Brondby, Toulouse, Bolton Wanderers (current)
Position Centre-forward.
Is he any good? He started two of Sweden’s group games at Euro 2008, albeit out of position, but I didn’t see enough of him to comment on his quality. From what I’ve heard and seen, he’s physically strong, has a good turn of pace and is composed in front of goal. His scoring record for Sweden (11 goals in 38 games) is decent, and he has never struggled to find the net for any of his clubs; he scored 22 goals in 58 games for Brondby, and 22 in 62 for Toulouse, where he was voted player of the year in his first season.

In his own words “It’s a dream I’ve been having since I was a small child to play in the Premier League one day. It is the best league in the world so this is a dream come true for me. I’m a player who will always fight for 90 minutes. I always give my best and play for the team.”
YouTube evidence

Pies verdict Â£10m seems a bit steep, but Elmander is a solid addition to Bolton’s squad. He’s no Nicolas Anelka (some might say that’s a good thing), but his whole-heartedness and work-rate will endear him to Trotters’ fans.
Have your say…