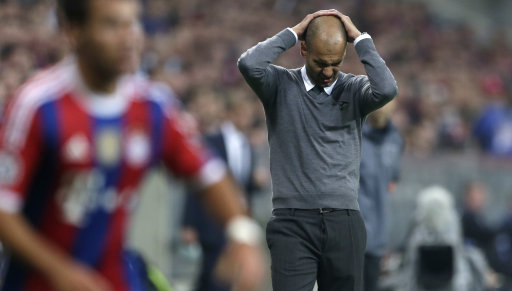 Spanish journalist Marti Perarnau has written a new book entitled “Pep Confidential” in which he, as you may be able to guess, profiles Pep Guardiola’s first season in charge at Bayern Munich.

While compiling the book, Perarnau was allowed to shadow Guardiola day-to-day and, as such, was privy to a number of clandestine remarks, with the Bayern coach even apparently admitting to hating “tiki-taka” – the obsessive possession-based tactical approach on which he seemingly based his entire Barcelona tenure.

Put it this way: if Pep hates tiki-taka then he does a bloody good job of hiding it!

Anyway, chatting over dinner the day after Bayern’s completely unsatisfactory 2-0 victory over Nurnberg in the Munich derby, Pep told Perarnau:

“I loathe all that passing for the sake of it, all that tiki-taka. It’s so much rubbish and has no purpose.

“You have to pass the ball with a clear intention, with the aim of making it into the opposition’s goal.

“It’s not about passing for the sake of it.”

Pep then followed up his mini-rant by emphatically addressing his players the following day and telling them:

“Be yourselves. You need to dig into your own DNA. I hate tiki-taka!

“Tiki-taka means passing the ball for the sake of it, with no clear intention – and it’s pointless.

“Don’t believe what people say: Barça didn’t do tiki-taka! It’s completely made up! Don’t believe a word of it!

“In all team sports, the secret is to overload one side of the pitch so that the opponent must tilt its own defence to cope.

“You overload on one side and draw them in so that they leave the other side weak.

“And when we’ve done all that, we attack and score from the other side.

“That’s why you have to pass the ball, but only if you’re doing it with a clear intention.

“It’s only to overload the opponent, to draw them in and then to hit them with the sucker punch.

“That’s what our game needs to be. Nothing to do with tiki-taka.”

If Pep truly hates tiki-taka then Pies give up. We officially have no idea what’s going on anymore.

Is the sea not salty? Is the moon not made of polystyrene? WHAT YEAR IS THIS? WHO’S THE PRESIDENT, GODDAMNIT?!!