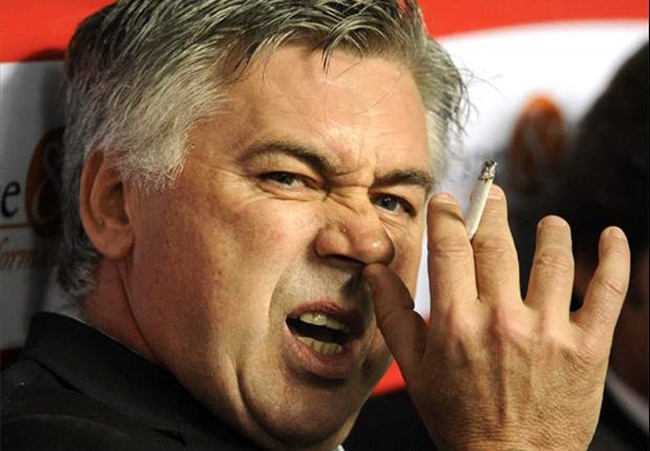 Bayern Munich recently appointed Hasan Salihamidzic as their new sporting director and the former Champions League-winning midfielder’s first order of business was a decidedly risky one.

In an effort to promote a more wholesome, healthy image, Salihamidzic approached head coach Carlo Ancelotti and asked him to stop smoking on club premises, be that sneaking out for a ciggie during training sessions or enjoying a crafty bifter round the back of the bins at the Allianz Arena on matchdays.

I asked Carlo Ancelotti not smoke at the club. Of course he accepts that — he is a true professional.

Since the ban became enforced, Bayern have lifted the Super Cup and walloped minnows Chemnitz in the opening round of the DFB Pokal, leading Ancelotti to remark:

This is good for my health, my wife is delighted.

May we suggest that Ancelotti’s punishment for breaching the ban should be the same as that metered out to Robert Lewandowski during his years as a teenage tearaway?

As revealed in his autobiography, the Bayern striker was once caught huffing away on a cigarette during a football training camp in Poland only to receive a brutally literal sanction from the camp supervisors.

“I had to take care of a fire extinguisher for half-a-year,” Lewa reminisced, mangled translation notwithstanding.

Think on, Carlo. Think on.