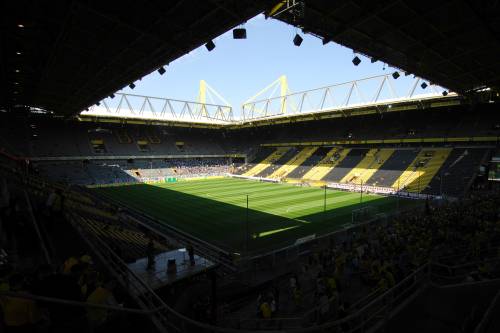 German side Borussia Dortmund have become the first football club to thwart the increasing threat of the vuvuzela making it’s way into the domestic leagues next season by banning the monotonous South African trumpet from their home ground as of today.

The moronic horn, which has flatlined throughout every single World Cup game so far, is in danger of being exported back from South Africa by the kind of myopic hoarders that bring pebbles back from the beach – but the Bundesliga outfit have issued a definitive message to those fans who may be considering holding on to their vuvuzela.

“Our fans don’t want to have these trumpets. It is nerve-racking and completely drowns out any chanting.

We have decided as a work group at Borussia Dortmund that these horrid things will be forbidden from the Westfalenstadion.

Anybody who does not abide by this will face the consequences.”

No one wants to find themselves suspended over a snake pit in a secret bunker miles below the Westfalenstadion, being slapped in the face repeatedly by a leather-clad Baron whilst an erstwhile henchman inserts the offending vuvuzela about their person – now do they?