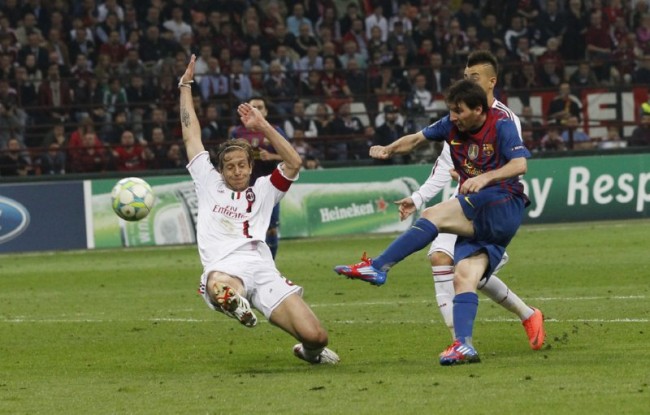 Not that we wish to brag but, as the prophecy once again foretold, AC Milan’s superb, frenetic and knackering defensive shift ensured that Barcelona were kept schtum in a Champions League tie for the first time in two-and-a-half years and that the Rossoneri upheld their record of having never lost a Champions League quarter-final game at the San Siro.

Robinho should have opened the scoring after two minutes, but the flimsy git wafted a volley over the bar, before Alexis Sanchez seemed to con their entire watching world into thinking he should’ve had a penalty shortly after.

We’ll begrudgingly admit it was debatable, but what we saw was the Chilean do his utmost to just toe-poke it blindly past Cristian Abbiati and then cock a leg into the Milan goalkeeper as he fell. Standard fare. No penalty, yellow card for Sanchez for being such a cynical little scheister.

All and sundry were berating the fifth official for not waving his magic wand. Here’s a thought, maybe he didn’t give it – not because he’s a clueless, non-committal half-wit bottler – but because it wasn’t a penalty?

Anyway, what followed, generally speaking, was 70-odd minutes of Milan defending like war-worn heroes, sweat pooling and pouring from furrowed brows as Ambrosini, Nesta, Bonera and Antonini (who even celebrated a particularly valiant lunge like he’d been told it was chips for tea) continued making block after block after sinew-frazzling block until Barca ran out of ideas.

We reckon you can probably expect to see the same kind of thing in the Nou Camp next Wednesday.