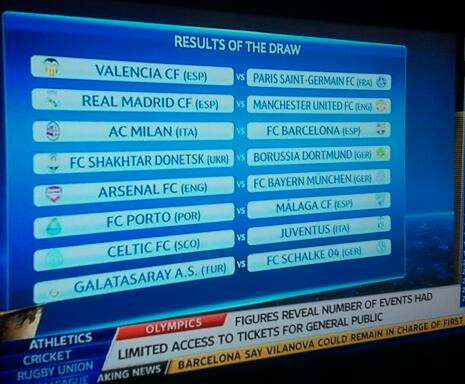 What you’re looking at there is actually a Sky Sports News graphic from yesterday when UEFA conducted their rehearsal for the Champions League last 16 draw though, by some bizarre twist of fate/rigging, today’s actual draw has produced exactly the same ties!

The actual draw is as follows…

Amazing. According to an ESPN statistician, the raw odds of getting exactly the same Last 16 draw twice in a row are about 0.00005%, which equates roughly as a ‘1 in 2 million’ chance.

As for the draw itself, there are some choice ties but the British teams haven’t fared well – though, to be fair, there wouldn’t have been any particularly kind draws whichever way the balls had dropped (so to speak). That’s the nature of the beast after all: Europe’s creme de la creme.

In all honesty, we can see all three going out with Real Madrid, Bayern Munich and Juventus all looking that bit stronger than Man Utd, Arsenal and Celtic respectively.