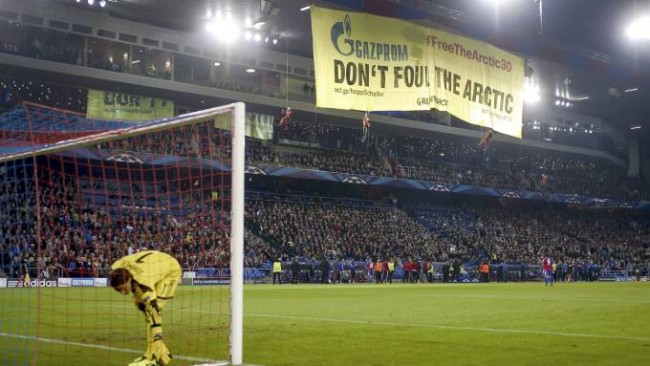 Last night’s Champions League tie between FC Basel and Schalke 04 had to be temporarily halted during the first half when Greenpeace protesters unfurled a huge banner from the roof of the stadium as they abseiled down to pitch level.

Proceedings were interrupted and the match was stopped while security staff removed the activists from the premises and took down their banner, which was protesting against Champions League sponsors Gazprom (who are also Schalke’s principal club sponsor) and their current Arctic drilling operation, as well as campaigning for the release of 30 fellow Greenpeace protesters who are being held by Russian authorities for taking part in a peaceful protest against the potentially disruptive oil drilling.

Later on in the evening the game was temporarily halted once again, this time while the several thousand supporters had their jaws re-attached having witnessed Julian Draxler’s superb winning goal – unfortunately, the quality of the only footage we could find doesn’t exactly do it justice…

Great goal, sadly filmed on a potato by the looks of things.