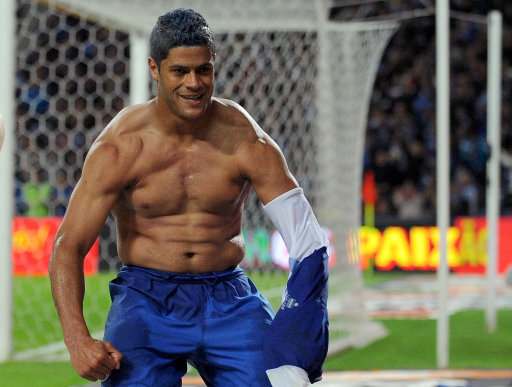 With Hulk returning to Porto last night with Zenit for the first time since the big move St. Petersburg-wards in the summer of 2012, it afforded the Brazilian forward the chance to see his new statue in the Portuguese club’s museum at the Estadio do Dragao.

On the morning of the match (which ended 0-1 to Zenit), Hulk told reporters that he was looking forward to seeing his new statue for the first time in person, having only ever seen photographs of the slightly weird grey, half-naked homage at that point:

“I’ve still only seen the statue in a photo,” said Hulk before the game. “But I thanked [Porto] for the homage. I hope to have the chance to see it and take a picture next to it.”

The statue depicts the player posing, all flexed up and henched to the max (or something like that) in his trademark goal celebration and is more than a little auspicious, especially when compared to the relatively tame effigies that surround it…

Is it just us, or does it look like someone left a plasticine model of Ivan Drago next to the radiator for too long?