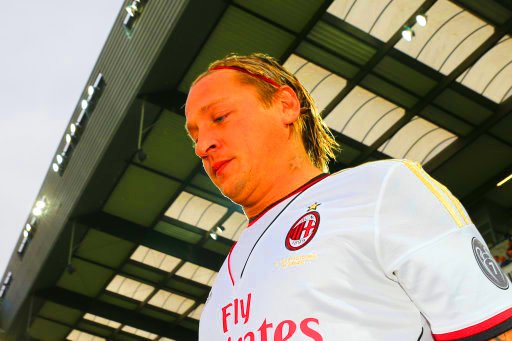 You may have noticed that Philippe Mexes was missing from AC Milan’s backline for their 3-0 victory over Celtic at Parkhead in the Champions League last night, as the French defender was forced to miss out on the trip to Glasgow due to a niggling injury.

Mexes is currently struggling with a problem that is effecting his left eye though the precise root of the issue has bamboozled the medical staff at Milanello, with Milan vice-president Adriano Galliani recently labelling the problem as “bizarre”.

However, Tuttosport are reporting today that Mexes is suffering from ‘Acute posterior multifocal placoid pigment epitheliopathy’ which, in Layman’s terms, means that his central vision is impaired in his left eye – a disorder brought on, in Tuttosport’s estimation, by the Frenchman enjoying one to many sessions on the sunbed.

Their fairly unscientific diagnosis is based on the fact that, while Milan does not look much like the Maldives at the moment, Mexes still managed to turn up to a recent function for the Milan Foundation with “a tan to be envied.”

Of course, there’s no way of knowing if Tuttosport are correct or not, but as far as we’re concerned this one’s certainly ridiculous enough to be added to the pantheon…