It’s quickly becoming nigh-on impossible to keep track of the milestones Lionel Messi seemingly passes on a game-to-game basis, but even by his own inimitable standards, last Saturday’s was a biggie.

On Saturday, he surpassed Telmo Zarra’s long-standing record (251 goals) to become La Liga’s all-time top-scorer with a hat-trick in Barca’s 5-1 win over Sevilla – thus taking his total haul to 253.

Skip forward four days and a back-to-back hat-trick against APOEL Nicosia saw Messi break Raul’s Champions League goal record (which he equalled with a brace against Ajax last time out), with the Barca star scoring his 72nd, 73rd and 74th goals in the competition to move clear at the top of the pile.

Sealing both records with a hat-trick? What a show-off…

While we appreciate that the “greatest of all time” debate is entirely subjective and largely unquantifiable, one look at Messi’s Record of Achievement is certainly enough to sway our vote… 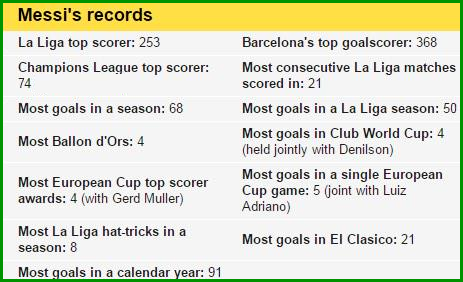 Enjoy that table while it lasts because it’ll probably be completely out of date by this time next week.

Surely there can be no argument now? Surely?